Petrified wood is a fossil. It forms when plant material is buried by sediment and protected from decay due to oxygen and organisms. Then, groundwater rich in dissolved solids flows through the sediment, replacing the original plant material with silica, calcite, pyrite, or another inorganic material such as opal.

Some specimens of petrified wood are such accurate preservation that people do not realize they are fossils until they pick them up and are shocked by their weight. 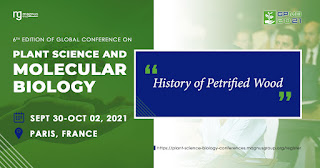 If any of the scientists or scholar would like to talk on petrified wood, can submit their abstract at the following link: GPMB 2021 | Abstract Submission Link

If you have any queries or if any information required, please write an email to plant-science@magnusmeetings.com or can send a whatsapp text to +1(434) 381 1007

Apart from that researchers stated that there is only one percentage of rainforest plant species have been studied for medicinal potential and remaining comes under left behind. 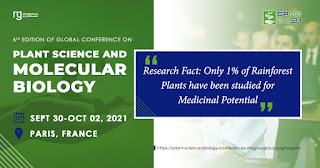 Scientists and Scholars who are having with research paper on rainforest plant species can submit abstract at the following link: Abstract Submission Page
For queries or any futhur information, please contact us through an email (plant-science@magnusmeetings.com) r can send a direct text message through whats app (+1(434) 381 1007)

Before the 16th-17th century, almost all cultivated carrots were purple, with mutated versions occasionally including yellow and white carrots. Orange carrots are believed to have been cultivated by Dutch growers who took mutant strains of the purple carrot and developed them into the modern-day variety. It is further believed that orange carrots are easier to grow. 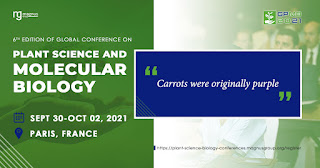 Plant Science proves that we can cultivate the species, which are necessary and required.

Scientists might have different types of ideas, research papers and information on many types of historical species and on new generation mutant species.

We take pleasure to invite scientists to join and speak on mutant species at 6th Edition of Plant Science and Molecular Biology (GPMB 2021)” is scheduled during September 30- October 2, 2021 at Paris, France.

Please follow the link for abstract submission: https://plant-science-biology-conferences.magnusgroup.org/submit-abstract and for queries, please write to plant-science@magnusmeetings.com or can send a whatsapp text to +1(434) 381 1007

Plastics can change the soil chemistry

Almost from few decades we are all fighting against plastic to save our environment but due to the current COVID situations, every one of us are using hand sanitizers. Where the hand sanitizer bottles are made up of plastic.

As per the safety measures every one need to use the sanitizer, which means an individual use 30ml of sanitizer bottle for two days. If we calculate the world population use, one bottle per two days, it gives huge number.

We only see the financial status are getting down due to COVID but we forget about our Earth. If our Earth is good, we can handle any kind of viruses but if it got damaged, we will be out of protection from our mother earth. 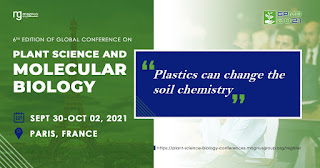 Kindly take care, do not through your sanitizer bottles after it got empty, just club it and send it for the recycling.

Scientists, who has research topic on “How plastic changes the soil chemistry” can drop your abstracts at the following link: GPMB 2021 Abstract Submission Link or for any queries, kindly write us at plant-biology@magnusscigroup.com or can send a whatsapp text to +1(434) 381 1007

Depending on the active ingredient used, hand sanitizers can be classified in to two types: alcohol-based or alcohol-free. Alcohol-based products typically contain between 60 and 95 percent alcohol, usually in the form of ethanol, isopropanol, or n-propanol. At those concentrations, alcohol immediately denatures proteins, effectively neutralizing certain types of microorganisms. Alcohol-free products are generally based on disinfectants, such as benzalkonium chloride (BAC), or on antimicrobial agents, such as triclosan. The activity of disinfectants and antimicrobial agents is both immediate and persistent.

Alcohol based products contains ethanol or ethyl alcohol (C2H5OH), when applied alcohol based sanitizer ethanol gets evaporated and gets reacted with atmospheric hydroxyl radical and produce acetaldehyde which is the primary sink for atmospheric ethanol, thereby potentially contributing to ozone and smog formation including peroxyacetyl nitrate (PAN).

Study demonstrates that the rainwater concentrations of ethanol have risen due to increased production and use of ethanol as a biofuel. As per the current COVID situations, the production of ethanol from individual person is also added to the industrial ethanol pollution. Rainwater and gas phase ethanol concentrations increased approximately fourfold between 2010 and 2017 in Wilmington, NC, USA 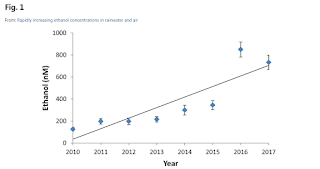 Volume-weighted annual average rainwater concentration and standard deviations for ethanol in nM vs. year for rainwater collected in Wilmington, NC, USA. The year 2010 contains summer data only (n = 11). The Mann−Kendall Trend Analysis for these data is significant at p = 0.043; the regression line shown has R = 0.8678 and p < 0.01 for n = 8 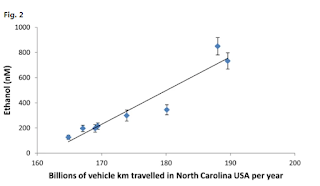 Volume-weighted annual average rainwater concentration of ethanol in nM with standard deviations for rainwater collected in Wilmington, NC, USA between 2010 and 2017 vs. billions of km driven by vehicles in North Carolina, USA, per year over the same time frame. For the regression line, R = 0.9517, n = 8 and p < 0.001

Plants: Plants are really important for the planet and for all living things. Plants absorb carbon dioxide and release oxygen from their leaves, which humans and other animals need to breathe. Plants help to clean water too.

If 50ml of hand sanitizer contains 63.25% of ethanol and an individual use on average 10ml of hand sanitizer per day which contains 12.65%. The current world population is 7.9 billion and approximately if an individual use 10 ml of ethanol per day then it’s producing 79000 Megaliter in to our atmosphere.
As per the above mentioned studies, the ethanol concentration in rain water and in air is increasing and studies shows increase in ethanol concentration will effects the plant growth but the current COVID situations tends to increase the usage of individual alcohol based hand sanitizers.

There are many differences among people, differences depends on what they have and what they don’t have but the common thing everyone of us having is our “Earth”
There are only few things that all the people from different regions celebrate commonly, among those Earth Day is the important one. Today our world is celebrating The Earth Day i.e. on 22 April 2021.
We GPMB 2021 | Paris, France is raising a theme “What we receive; depends on what we sow”on this Earth Day. If you give good you will receive good and if you receive evil means you are giving some evil. We should not expect right things to happen by doing wrong things. 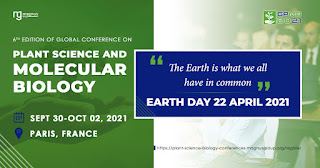 Don’t pollute the precious thing what God has given. Keep it clean, good and do not damage. Finally, GPMB 2021 | Paris, France is intimating as per the current situations, that take care of the Earth then it will give life to everyone of us.

For your comments or queries, please reach us at plant-science@magnusmeetings.com or can get in touch with us through a whatsapp (+1(434) 381 1007)

Does; Apple, Potatoes and Onions have the same taste?.

There are many interesting facts about plants among those, the major on is Apple, Potatoes and Onions have the same taste, when we eat them with nose closed.
Only researchers can answer this, as they have an idea on the common substances that present among those three and the relation between human sense organs and the taste papillae. 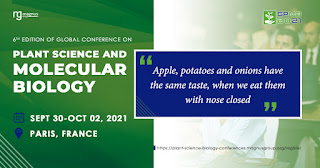 Scientists or scholars, who are in a research area of the above mentioned statement, can submit their abstracts at GPMB 2021 website or can send directly to our email ID plant-science@magnusmeetings.com or can send queries to our whats app number +1(434) 381 1007
at April 21, 2021 No comments:

Plants Metabolites: Possibility of Natural Therapeutics Against the COVID-19 Pandemic

Wondered by seeing the research title, natural therapeutics against COVID. Every one of us must appreciate those scientists, who are working on the above mentioned title.
World is not able to handle the COVID but our natural things i.e. plants and it’s metabolites can handle and work against COVID. Is that real? 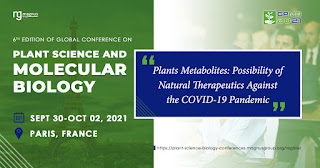 If any one are willing to share about natural therapeutics against COVID or anyone would like to share their views can drop an email to plant-science@magnusmeetings.com or please send a whatsapp text to +1(434) 381 1007
The received abstracts or views will be updated on the GPMB 2021 | Paris, France web page.

Pesticides, became necessary in the process of agriculture, but on the other side pesticides are becoming the major component in the land pollution.
“We should not expect right things to happen by doing some wrong tings”
Scientists who are willing to show the results of pesticides pollution and it’s impacts on the plants, land and water can come and share their views at the “6th Edition of Global Conference on Plant Science and Molecular Biology (GPMB 2021)” scheduled during September 30- October 2, 2021 at Paris, France” 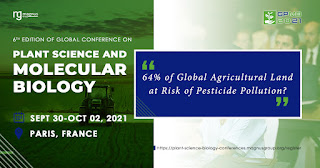 “He was strangled with a rope and his throat was slit, he was drowned in a bog lake. Then, Sphagnum spp. preserved him in a crucible of acidity, tannins and anti-microbials for two thousand years. His body, his face, his fingerprints remain. His name is lost.” Is this true? 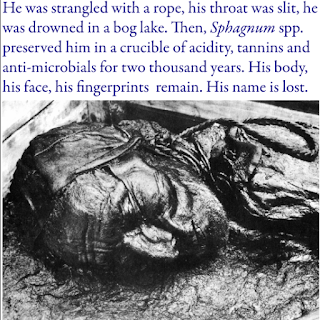 Researchers, who works on bog and mosses might know about this and we invite scientists who works on the above to join and speak at the “6th Edition of Global Conference on Plant Science and Molecular Biology (GPMB 2021)” to be held on September 30 – October 2, 2021 at Paris, France. #GPMB2021 #PlantScience #PlantScienceConference
Hope everyone are curious about this, even we are all waiting for some scientists who come us with this interesting topic.

Hope everyone are curious about this, even we are all waiting for some scientists who come us with this interesting topic.

There are few more interesting topics, which are going to be delivered at GPMB 2021: https://plant-science-biology-conferences.magnusgroup.org/program/scientific-program

Kindly send your interest or queries to plant-science@magnusmeetings.com or can send a whats app text to +1(434) 381 1007

Hurry up!!! Get in quick to make sure to register and confirm your participation. If you are interested to participate in #GPMB2023 , Regist... 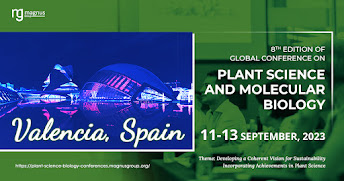